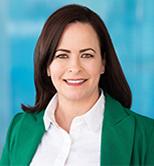 Ambassador Kristen Silverberg is Executive Vice President of Policy at Business Roundtable, where she leads the Policy team. She previously served as a Managing Director at the Institute of International Finance. She served in the George W. Bush Administration as U.S. Ambassador to the European Union from 2008 to 2009 and as Assistant Secretary of State for International Organization Affairs from 2005 to 2008. Prior to her time at the State Department, she held a number of senior positions at the White House including Deputy Domestic Policy Advisor.

Ambassador Silverberg served in 2003 in Baghdad, Iraq for which she received the Secretary of Defense Medal for Outstanding Public Service. She formerly practiced law at Williams and Connolly, LLP in Washington, DC and served as a law clerk to Supreme Court Justice Clarence Thomas and Judge David Sentelle of the U.S. Court of Appeals. She attended Harvard College and the University of Texas School of Law, where she graduated with High Honors.